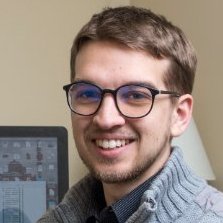 I have always been interested in design, but I never anticipated becoming an art major; it sort of just happened. For a long time, I planned to go to school for architecture, but then I had the problem of falling in love with a school that offered no architecture degree (and no engineering degree either, which was my fallback plan). I wanted a solid and challenging liberal arts education, and I wanted to be involved in a good music program. Hillsdale fit the bill and left all sorts of good impressions on me when I visited it with a friend. I didn’t give up my architecture dreams, but I followed my heart instead of my brain and ended up as a physics major — which I hated — at Hillsdale — which I loved. After a switch to mathematics for a semester, I decided on an art major at the beginning of my sophomore year.

There are times when I wonder why I was at all surprised that I ended up in design. My earliest hobbies involved filling large notebooks with drawings, mostly of cars that I planned to build some day or of women in 19th century garb. I spent a fair amount of time playing computer games, but my two favorite computer programs were Sierra Home Architect and Printmaster Gold (somewhere in the attic there are probably a couple boxes of quarter-fold greeting cards with corny clip art on the front and my middle-school signature on the back). I was obsessed with cars for many of my early teen years. One of my best friends was too, but we couldn’t agree on much because he only cared about performance and I only cared about design. I took up photography as a hobby in high school, and I taught myself web design, which paid for my first laptop and a year of college. I attended a small vocational Bible college after high school, where I served as editor of the yearbook and managed to enjoy it in spite of Microsoft Publisher’s best efforts to curb my enthusiasm.

And yet, when I went to college in 2010, I enrolled as a Physics major.

I took a basic design course at Hillsdale the second semester of my freshman year, and this started me on the track toward becoming an art major. I spent the following summer working as an assistant editor for Math-U-See, an excellent math curriculum geared toward the home education market. My main job was proofreading textbooks (I worked on everything through Pre-Calculus) and gathering research for a website project, but it was my first exposure to InDesign and I was given a number of chances to exercise my creative abilities. The in-house designer at Math-U-See lent me Gary Hustwit’s excellent documentary Helvetica and Ellen Lupton’s Thinking With Type. I was hooked. I’ve been thinking with type ever since.

Outside of my work and studies as a graphic designer, I spend my time cooking, singing, playing the piano, and learning foreign languages. I also enjoy reading, drawing, hiking, rowing, and sculpting.